The Basics of the PAYE Tax System in UK

As a small business owner in the UK, you would do well to learn the basics and specifics of the Pay-As-You-Earn system (PAYE). The PAYE system is a convenient method of paying government insurance contributions and income tax suited for small businesses in UK. This means that during every earning period, companies deduct tax and contribution from your employees' wages or occupational pension as opposed to collecting and paying taxes in one go.

Instead of paying small business taxes in the UK as one lump sum, PAYE system makes your employees contribute tax each time they are being paid for work. Wages are fixed, regular payments made by an employer to an employee. It consists of sick pay, maternity/paternity pay and adoption pay. Your business is responsible for sending the tax to Her Majesty’s Revenue and Customs (HMRC). The PAYE system can also be used to collect the income tax of any other taxable income or other sources of income such as untaxed interest or rent. It can even be used to collect other money that you owe to HMRC including overpaid tax credits, tax debts from previous years and unpaid self-employed national insurance contributions. 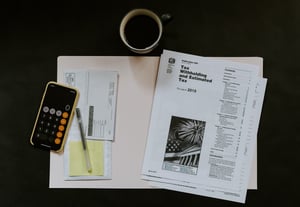 HMRC uses a tax code to indicate how much tax should be deducted from your workers' wages and pension. If the HMRC does not have enough information to issue a full tax code, you may have to use an emergency tax code until more information is received, and the tax code can be adjusted. PAYE codes are typically easy to trace, made up of a number followed by a letter—the number shows the amount of income that your employee has as allowances that can be set against tax, while the letter classifies the type of allowance(s) that your employee is getting.

When the tax office is unable give you a tax code for deducting the right amount of tax over the whole year, it may issue an emergency code with which to tax your employees. An emergency code means that your employees are only entitled to the basic personal allowance and will not take into account any other allowances and reliefs that they might be entitled to. In the event this happens, you'll just have to wait for the tax office to give a correct PAYE tax code and complete details of previous earnings and tax paid in a particular tax year, which will help you in tax planning and deduct the correct tax in the future. This will also allow refunds for any overpaid tax caused by the emergency code.

To get in-depth information and details on the PAYE system from tax specialists, get in touch with our professional advisers – our familiarity with tax laws in different countries D&V will definitely prove advantageous to you during the course of your tax planning.

5 Challenges Faced by Small Businesses and How to Solve Them

The Crucial Role of Allied Health Professionals in Australia